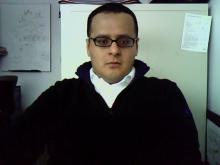 This project is focused in the enzymatic production and characterization of active inhibitors for human NADPH oxidase from natural phenols such as apocynin. Our study includes a better understanding on the mechanism of inhibition. Vascular endothelial cell based studies will allow us to identify active inhibitors of the NADPH oxidase and enzyme-linked immunosorbent assay (ELISA) will provide us information about the role of inhibitors on protein interactions during enzyme activation. Oligophenols from apocynin as well as from other sources (e.g. resveratrol) can be produced enzymatically and tested in other protein-protein interactions related with human diseases such as Alzheimer; characterization of new oligomers (from Resveratrol) with therapeutic potential is part of my collaboration with Professor Tessier’s group.

- Combinatorial biocatalysis in the chemoenzymatic synthesis of mucin analogs

Mucin is a group of protein-containing glycoconjugates with high sialic acid or sulfated polysaccharide content. Its biological function is to act as a barrier against infectious pathogens. The goal of this project is to prepare mucin analogs using combinatorial biocatalysis. These mucin analogs will be evaluated as anti-infective for screening against type 2 and type 3 level pathogens as barriers as coatings and in nanomaterials for use in protection following accidental or deliberate exposure to infectious agents

Center for Biotechnology and Interdisciplinary Studies